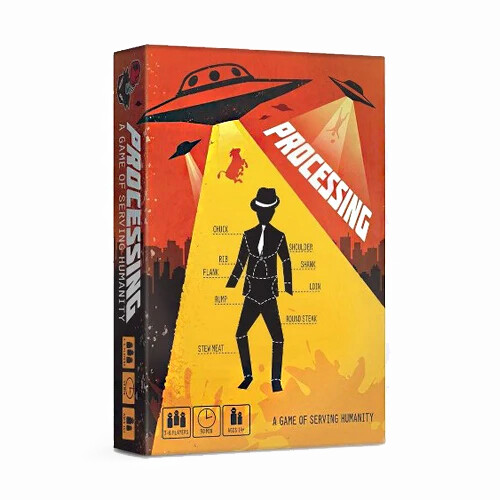 Processing at a Glance
A social game of terrible democracy
Easy to learn, but hard to win
Requires strategy, negotiation, and planning to survive

The World of Processing
Aliens have conquered Earth, but that's not the worst of it. As a survivor, you've been enslaved to figure out who gets "Processed," "Probed," and "Freed." There's one more wrinkle: the aliens think cows are people too.

Processing is a social game of terrible democracy. A conveyor belt of cows and hipsters will be marching towards their fate and you must decide which get "Processed" into meat, "Probed" for science, or "Freed" to live under alien rule.

The Confederated Alien Overlords (CAO) demand you work to appease them all, but since they all want different things that will be tough. There are three rounds and you'll have to pick a different Alien agenda each round. The game is easy to learn, but hard to win requiring strategy, negotiation, and planning to survive working for our Alien Conquerors.

In Processing, you're everyday people enslaved by Alien Overlords. Your task? Sort out Earth's remaining survivors.
Cast votes on the moving conveyor belt. Determine who gets freed, who gets probed "For Science!" and who gets processed.
Make your alien bosses happier than the other players, and you're free.