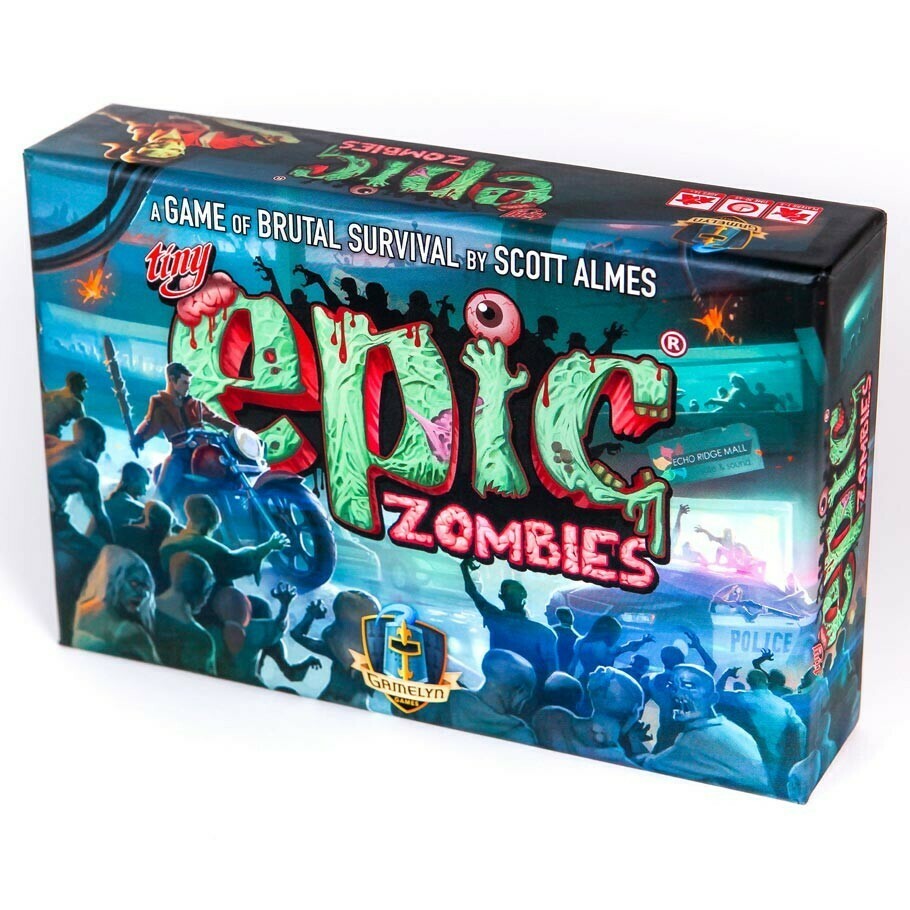 In Tiny Epic Zombies, survivors are always on the run, collecting weapons, killing Zombies and working toward completing objectives. Completing 3 objectives can win you the game but if you're too focused on the objectives, the Zombies will overrun the mall and that will be the end of you.

Based on the mode of play, you will either play as one of the Survivors or as the Zombies.

As a Survivor, your turn will consist of moving 3 times. Then based on where you move, you'll be able to do additional things. For instance, if you move into a room with a Zombie, you'll have to fight it by rolling the Zombie die. Or if you move into a room adjacent to a Zombie, you can spend ammo to shoot it. Killing a Zombie is actually pretty easy... but they just keep coming. Keeping them from overrunning the entire mall, while trying to accomplish your objectives, that is hard!

After you've taken your 3 moves, you'll search the room. This is done by revealing the Search Card you are holding. Most of the time, you find something useful, like awesome items you can later pickup and equip to your ITEMeeples. Sometimes though, you may find a Zombie lurking in the corner. So be prepared.
After you search the room, more Zombies flood into the Mall. Then it's the next player's turn. Simple as that.

Note: If your ammo and wound tokens ever meet, you're dead meat! So, keep your wounds low and your ammo high.

If you die, that character will turn into a Zombie and you'll have to draw a new character to play. If that happens too many times, you lose the game.

As a Zombie player, not only will you control unique Zombies with special abilities, you will control ALL the Zombies! With your help, the Zombies will have a brain in addition to eating brains. Your game will be to overwhelm the players with clever placement and movement of the Zombies. Smother them with your Zombie horde and prevent them from completing their objectives. If you kill enough players or overrun the mall courtyard, you win..